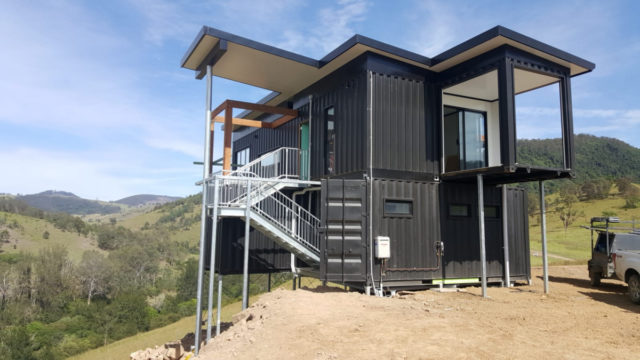 They’re almost indestructible, capable of withstanding practically any kind of weather, economical to build and ready to move into in a matter of weeks. And, you are doing the planet a favour by recycling thousands of kilograms of steel.

Shipping container homes are becoming increasingly popular for all these reasons and more. Containers are also getting second lives as cafes, accommodation and a range of commercial applications.

Michael and Julie Redpath, with Lucy and Alice. Photo: Michael Redpath
Pharmacist Michael Redpath, his GP wife Julie, and daughters Lucy, 14, and Alice, 12, have just finished building a holiday house in the stunning rural area of Gloucester in NSW.

It was partly the location that prompted the container build. It is difficult and expensive to get tradespeople to work for long periods of time in remote locations.

The Redpaths’ architect-designed house – with three bedrooms and two living rooms – took about 12 weeks to complete, which is a little longer than usual. “Our house was a bit of a challenge. It’s at the top of a steep site and it’s two storeys,” Mr Redpath says.

container homes
The Redpaths’ container home at Gloucester under construction. Photo: Michael Redpath
The ground floor, which is bedrooms and bathroom, used one 40-foot (12.2-metre) and one 20-foot (six-metre) container. On the first floor, placed at right angles to the lower level to create decks, two 40-foot containers create a living room with views down the valley.

“We did something a bit ‘out there’. Architecturally, it’s fairly striking,” Mr Redpath says. 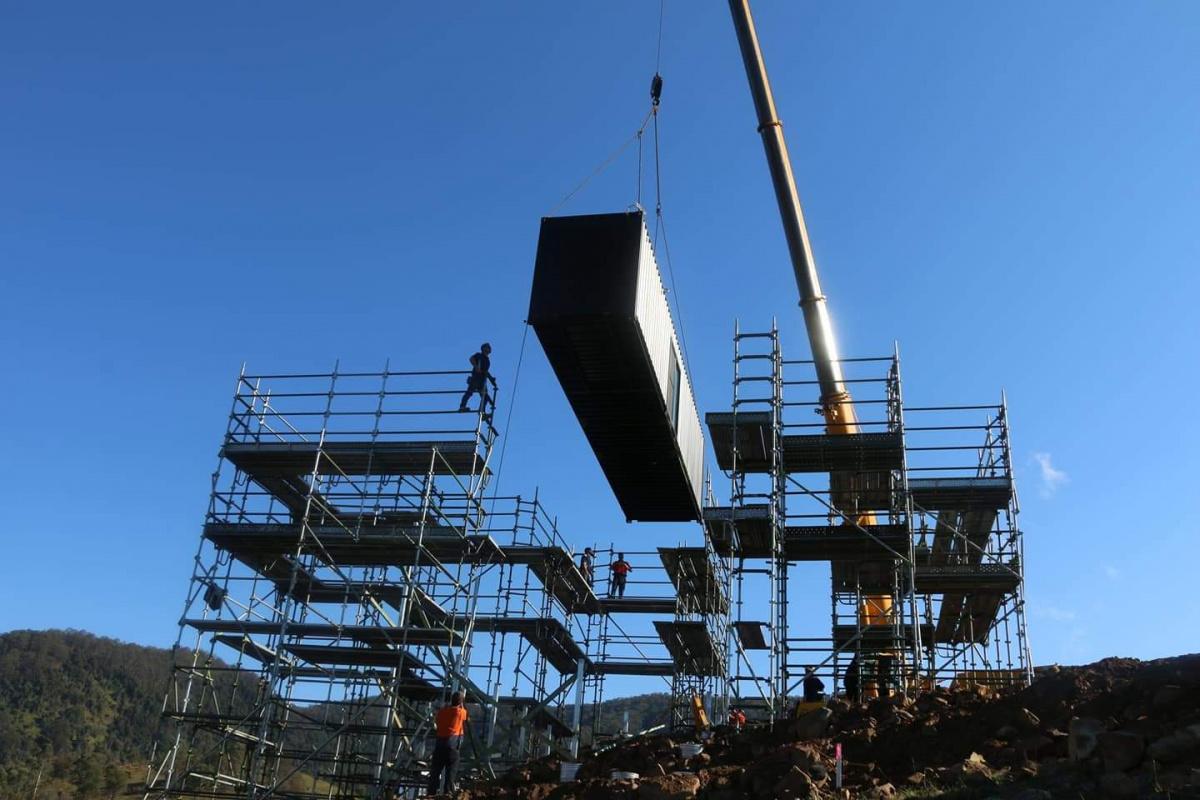 The home operates off-grid, with solar power and batteries, tank water with river water back-up. It even has its own sewage system.

Container homes can flash their industrial credentials or be made to appear like a traditional house inside and out using any of the finishes available on the market.

Almost all of the transformation from cargo container to house happens in a factory. That’s where insulation, lining, kitchens, bathrooms, plumbing and wiring are done, adding further economies to the build because problems that can besiege on-site building, such as bad weather, have no effect on the outcome. 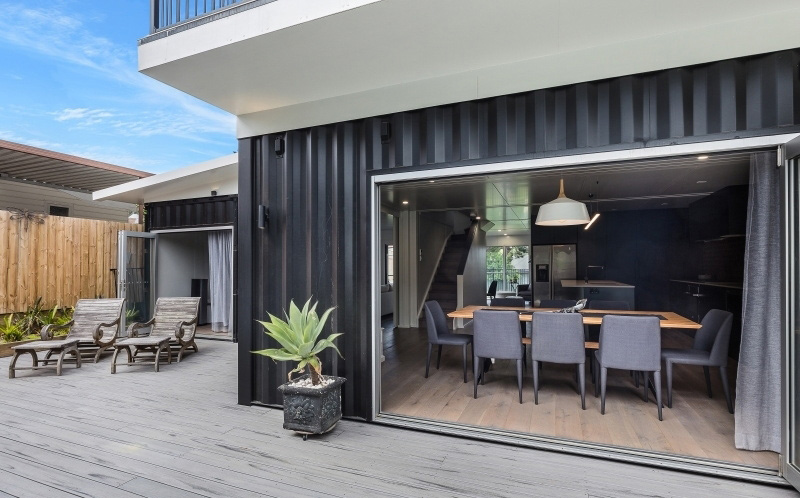 Container Build Group, based in Lismore, fitted out the Redpaths’ Gloucester home. Third-generation builders, Troy and Aden Moxon of Moxon Bros, prepared the site, assembled the home and took care of the final finish.

Container Build Group chief executive Jamie van Tongeren says it’s important to get the right container. Some people even buy them new to avoid the dents and knocks that secondhand containers can have.

Most of the containers destined to be turned into homes in Australia are new when loaded onto the ship – and that is the only time they will be used. Known as “one-trip” containers, they are generally in excellent condition.

However, not all containers re suitable for housing. It’s essential to know what has been carried in them and to avoid any that have had toxic or chemical cargoes. Mr van Tongeren uses containers that have brought white goods to Australia.

He began Container Build Group about 12 years ago and supplies container buildings across Australia, including units to councils for offices and meeting rooms. Other applications include cafes, a golf club, commercial work of all types and an increasing number of homes. The business has been so successful that he has just expanded into Hawaii.

Mr van Tongaren says that, in his experience, shipping container homes don’t present problems with permits for councils or financing for banks, and the houses are built to standard builder’s contracts.

Councils do treat permanent container homes as they would any other building; all the usual approvals, engineering, plans and inspections are required.

The homes offer a fast turnaround, are eco-friendly and cost effective.

The cost of having one built will vary according to design, location, site works and fitout. Mr Tongaren says a base model two or three-bedroom house starts at about $190,000 but can cost up to $450,000.

View all articles by jasonadmin

Keep in touch with our news & receive FREE newsletters.